Cool in summer, warm in winter

Energy-efficient houses of wooden prefab construction stay cool in summer without driving up energy usage thanks to a clever design – and a little bit of physics.

As soon as the sun stays out for a few days, it becomes clear that having a cool home in summer is just as important as a warm house in winter. While air conditioning systems help, not everyone feels comfortable about using them. And they devour a lot of electricity. Experts believe that the already high levels of energy required for cooling buildings will increase by 25% by 2030. It’s therefore no wonder that architects place the need to create a comfortable temperature inside at the top of the list of their most important challenges.

“Manufacturers of prefabricated houses are proving that pleasant temperatures are possible even without high power consumption,” says Achim Hannott, the chief executive of the BDF (the German federation of prefabricated home builders). They are equipping their particularly energy-efficient houses with technology packages that not only reduce demand for heating in winter, but also for cooling in the summer. This process often requires no electricity at all, relying instead merely on the laws of physics.

Where there is light, there should also be shade

The most important yet the simplest measure for a comfortable room climate is design-based sun protection. The principle? By creating shade at the right locations, the flow of direct sunlight into the house is minimised so that the rooms are less susceptible to overheating. Shade can be provided by wide roof overhangs, or – in the case of flat roofs or popular pitched roofs – by an elegant canopy. At HUF HAUS, the wide roof overhangs on the gable and eaves of the roof purlins that are typically used in a HUF home provide weather and sun protection while emphasising the building’s confident, open character. Overhangs at gables and eaves are approximately 1.50 m in the length; with pitched roofs, the roof overhang at the ridge is set at approximately 1.20 m.

Even the layout planning stage, it makes sense to think about the summer. Heat protection is often only a matter of orientation. The bedroom, for example, should not necessarily face the south or west; here, for most people the east is the most pleasant location in the house. And don’t forget that even a tree in the garden planted in the right place can represent a simple means of providing valuable shade.

Heat pumps, for example, utilise the differences in temperature between the interior and the outside as a heat source. Since, even in summer, soil and ground water maintain a constant temperature of between 8 and 15 degrees Celsius, this principle can also be reversed. In this way, heat pumps with additional features can also take charge of cooling the home. This turns the underfloor heating system into a floor cooling system.

In addition, so-called “ice heating” also uses the effect of crystallisation energy that is created when water turns to ice during the freezing process. To facilitate this, a large concrete cylinder is buried in the ground as a water store. In it, excess heat is stored over a long period of time. In the winter, a heat pump removes this energy from the store and cools the water to 0 degrees Celsius. When the water then turns to ice during freezing, this brings a further energy gain. In summer, the system works in reverse and uses the same heat pump to bring cool temperatures into the house. This “heating with ice” technology has already been implemented for some years in some HUF show homes and customers’ houses.

Smart houses work with the sun

As well the construction and building technology used, shade systems also play an important role in sun protection. Their benefit derives from their dynamic qualities, as window surfaces are covered only in the summer. In the winter, on the other hand, they remain uncovered and let both warmth and valuable natural light into the house. The entire glass facade on the ground floor of the striking timber-framed houses is fitted with electrically operated external blinds  right up to the top of the light plane. The horizontally arranged and movable slats provide flexible, customisable protection from the sun at any time of day and in any season.

One special feature here involves the way that light is regulated. The external blinds, in fact, form a curtain with their horizontal slats, which depending on the positioning of the slats can shield the incoming light entirely or divert it deep into the internal space in a targeted way. This is made possible by means of slats that can be rotated around their longitudinal axis. The external blinds provide protection from dazzle, glare and – most importantly – from the sun. Due to their outstanding light diversion and regulation properties, the external blinds contribute to the overall architectural effect by transforming light into a rapidly changing, vibrant design element. 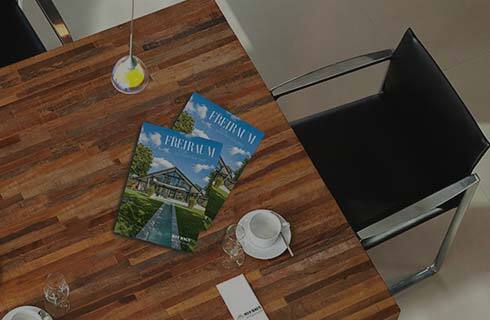 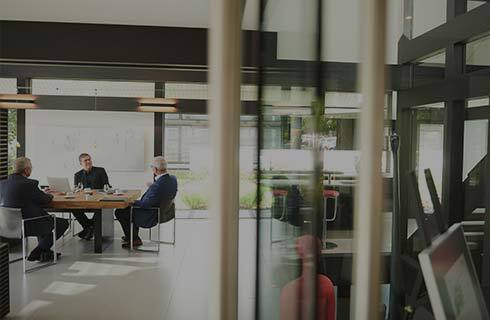 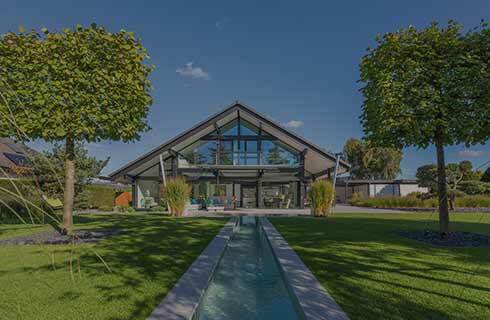