The Bauhaus style and the HUF Haus have one thing in common: There is not one Bauhaus style and not one HUF Haus. Anyone who likes to do without frills and instead prefers clear forms and restrained designs will opt for a cubic timbered house from HUF HAUS, for example in a modern flat-roof design.

Roof type flat roof
House footprint 242.37 m²
To the project
More about HUF HAUS?
Get in touch with us!

The HUF post-and-beam construction shows things exactly as they are. An open and transparent architectural language that has no secrets. The statically relevant components can be recognised at first glance - this honesty still fascinates today and is based on the roots of Bauhaus architecture. But there is more that connects the two, as can be seen in the history of HUF HAUS.

In 2019, the Bauhaus celebrated its 100th birthday: the distinctive style has since been considered "timeless" and is still practised today in its functional simplicity. Founders Walter Gropius, Ludwig Mies van der Rohe, Wassily Kandinsky or Paul Klee were among the most important minds of this style-defining period. Even today, builders are inspired by the aesthetics of the Bauhaus, the credo "form follows function" and the reduced design.

The family-owned company HUF HAUS was founded in 1912. In the same decade as the Bauhaus in Weimar, which, as an art school, brought together the subjects of art and craftsmanship for the first time.

The distinctive post-and-beam houses made of wood and glass were penned by Manfred Adams, who, as a student of the German star architects of the 1960s, Sep Ruf and Egon Eiermann, was also particularly influenced by the Bauhaus style. This is evident both in the straightforwardness of the design of his houses and in the openness of the floor plans, which was revolutionary by the standards of the time.

More about HUF HAUS?
Get in touch with us!

The surrounding skylight level and the floor-to-ceiling glazing create a look that looks elegant and timeless. The popularity of the Bauhaus objects, which proponents of architecture have certainly already visited in Dessau, the second school location after Weimar, is therefore probably timeless.

Did you know that HUF HAUS had already offered flat-roof houses in 1960, whose box architecture with many right angles resembles the exemplary Bauhaus master houses? The connections between HUF HAUS and the Bauhaus style can already be found in the history of the family business and culminate in the collaboration with the architect Manfred Adams, who shaped the face of the houses. The outer appearance of the HUF houses is still unmistakable today.

Join us on a voyage of discovery - in our HUF village in Hartenfels we will be happy to guide you through the world of HUF HAUS. A visit to our museum is worthwhile at any time, especially if you are interested in the parallels to the theme Bauhaus.

We recommend "FREIRAUM" by HUF HAUS to those who would like to inform themselves digitally in advance. Here you will find many inspirations and the portfolio at a glance. You are also welcome to call us so that we can answer your first questions quickly and competently. On our website you will also find a variety of house examples - discover Bauhaus houses in the portfolio of HUF HAUS in the house finder! 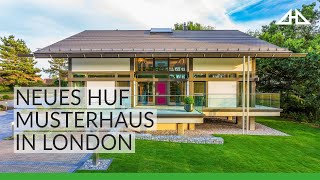 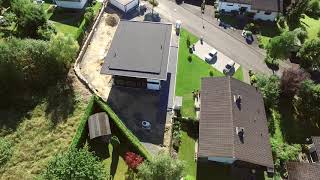 Time-lapse house in the Bauhaus style 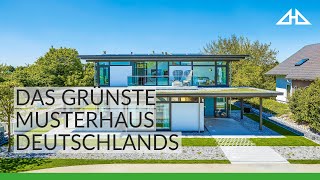 Order our Brochure
Arrange an appointment with us!
Dream Homes at a glance
First-hand experience: Visit us in Weybridge!
Visit the HUF Village in Germany